Pacific Islands Association of Non-Governmental Organisation (PIANGO) together with its National Liaison Units (NLUs) join in solidarity for the global call to leaders to take significant actions on inequality, climate and social justice.

PIANGO mobilised their civil society organisations in countries for the CSOs global campaign #StandTogetherNow for genuine commitments from state actors, to take action and live up to the ambition of the Sustainable Development Goals (SDGs) and the Paris Climate Agreement.

“We are calling on leaders for significant actions on equality, climate and social justice as they gathered at the UN General Assembly in New York to take stock of the progress and financing of the SDGs,” Ms Ilolahia said.

The #Standtogethernow global campaign calls on governments to guarantee the right to freedoms of expression, association and assembly and to ensure inclusion and participation for all; freely in all levels of decision-making processes without fear of violence or intimidation. It also calls on states actors to commit to reduction of military budgets in order to fund climate and environmental protection and fight against poverty, hunger and inequality.

Ms Ilolahia said the week-long campaign from its members other than the call itself reinforced two key messages, that people don’t need to be in NY to influence policy, but with the advance technology, Civil Society especially our young people can raise their voices from the distant Pacific.

“We also need to rethink of the thinking that someone else will do it for us from New York but to challenge our Leaders (who are the same Leaders that are meeting in New York) of what we can positively change right here at home, Ms Ilolahia added. 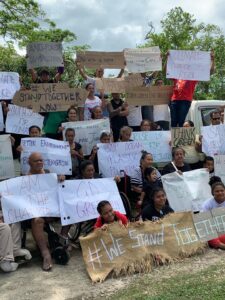