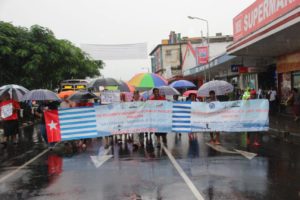 And the economic and social status of Papuans has not improved.

The report, authored by the Catholic Justice and Peace Commission of the Archdiocese of Brisbane, titled, “We Will Lose Everything,” says that claims by the Australian government that human rights situation in West Papua has improved, is untrue.

“Our investigations through visits to West Papua and by study of reports from credible witnesses and authorities make it clear that this claim is untrue,” the report said.

“What makes this claim even more outrageous is the fact that the Australian Government assists with the training of special army units like Kopassus and special police units like Densus 88.”

These Indonesia military units are responsible for the death and torture of West Papuans democracy activists.

The two persons delegation from the Catholic Justice and Peace Commission is the first of a number of shadow human rights fact finding missions to West Papua from the Pacific, after the Indonesian government was unwilling to accept a Pacific Islands Forum (PIF) mission.

Launching the report at St Andrews Presbyterian Church in Suva, Fiji this morning, the Head of the Anglican Diocese of Polynesia, Archbishop Winston Halapua urged the Pacific to stand with West Papua as they struggle for self-determination in the face of violence and intimidation.

“The message is, stand strong and do not be afraid, with God nothing is impossible” Archbishop Halapua said. In saying this, he was responding to the title of the report ‘we will lose everything’, affirming the Papuans that we are with them in their struggle.

As the Pacific, we have done this before, standing together recently prior to the Paris Climate Change Agreement talks to raise our voices,” Archbishop Halapua said.

In reference to the march in solidarity in the rain, he stated that “our walking from Flea Market to St. Andrews Church is a statement to be made together with the rain. We cannot do it alone as human beings, we have to do it with nature”.

Pacific Islands Association of NGOs (PIANGO) executive director, Emele Duituturaga who is in Port Vila, Vanuatu to attend the Vanuatu launching of the report said violence and bloodshed often marked the struggle for self-determination for Pacific nations.

“PIANGO’s representative to the launch Mr. Ilaitia Tamata echoed Archbishop Halapua’s sentiments. We must not be afraid as we stand with our brothers and sisters of West Papua as they struggle for freedom and self-determination,” Mr. Ilaitia Tamata.