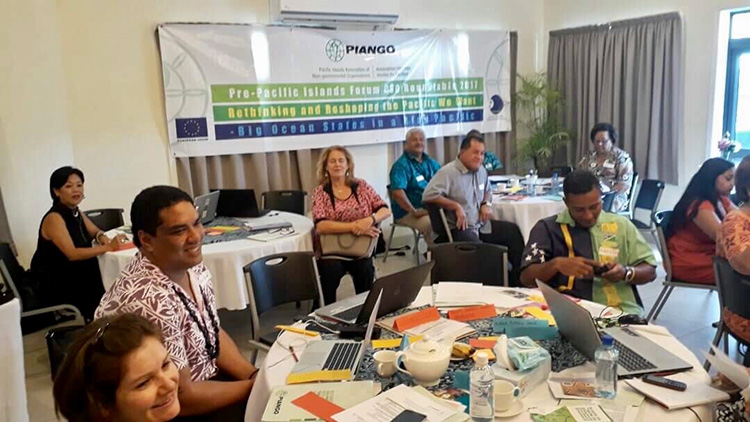 A team from PIANGO, led by its Board Chairperson, Sarah Thomas Nededog, is currently in Apia, Samoa to participate in consultations ahead of the 48th Pacific Island Forum (PIF) Leaders Meeting which will take place from 4-8 September 2017.

PIANGO convened a Civil Society Organisation (CSO) Roundtable on 31 August, 2017 in the lead-up to next week’s PIF Leaders Meeting. The Pre-PIF CSO Roundtable was designed to allow PIANGO’s members and partners to better understand the linkages between regional policy discussions and local and national actors. In addition, issues such as stewardship as a Pacific approach to resource management; the involvement of CSOs in public discourse for development effectiveness and self-determination and decolonisation were also discussed at the roundtable. CSOs will produce an Outcomes document which they hope to present to the Secretary General of PIFS, Dame Meg Taylor, at the end of the two-day meeting.

Delivering the opening remarks at the CSO roundtable, PIANGO Chairperson Ms Nededog said that it was an honour and privilege to be at the meeting and to speak, not just as PIANGO Board Chair, but as a member of the Pacific family, a Micronesian, a mother, a wife and a daughter of the Pacific.

“PIANGO has been convening CSO dialogues in the lead-up to the last few Forum Leaders meetings from Papua New Guinea to the Federated States of Micronesia and this year, here in Apia. Our hope has been that these will provide the much-needed space for our affiliates and national liaison units to deliberate and highlight community development issues to Forum leaders. Our purpose has been to continue to highlight issues of social justice that confront our region and to seek appropriate interventions,” Ms Nededog said.

“Many of us, as CSOs, continue to be engaged, in some way or another, in the work of social and human development. Everyday, we respond to issues such as unemployment, HIV/AIDs, substance abuse and even repressive environments, so much so that there is very little space or time for collective learning and policy lobbying and action, especially at this level. We are hoping that once CSOs understand the contexts, the linkages and the processes, they will use it to leverage the voices of the vulnerable, the weak and the disadvantaged in our Pacific communities so no one is left behind.

“Agenda 2030 or the Sustainable Development Goals (SDGs) sets out clear priorities for global leaders, including for us here in the Pacific. At the regional level, the Framework for Pacific Regionalism is a mechanism that the Pacific Islands Forum Secretariat has opened to civil society actors like us to enable our engagement with Pacific Leaders. In fact, there are participants at this roundtable who will be speaking to leaders next week about our own issues as CSOs. This was not possible 10 years ago,” Ms Nededog said.

Other instruments that have recognised the important role that CSOs, together with governments play in the development context are the Istanbul Principles and the International Framework for CSO Development Effectiveness. The roundtable aimed to help CSOs understand these mechanisms and use them to advance their work.

“It wasn’t too long ago that our elders were fighting colonisation, nuclear bomb tests and other indignities to our cultures, environment and way of life. It almost feels like we are reliving the struggles of our parents and their parents, when we consider what we have had to deal with in our own countries and in our regional work. Our islands continue to be threatened by climate change and larger powers like North Korea, if you are from my part of Pacific; while our ocean is subject to the powerful corporations that seek to mine its seabed. I want to urge all of us to begin thinking, not about the Pacific as a group of small islands in the big Pacific ocean, but to think and to speak, as people who hail from one big ocean state,” Ms Nededog said.