PIANGO pledge with churches for human rights and justice

THE Pacific Islands Association of Non-Governmental Organisations (PIANGO) and Pacific Conference of Churches (PCC) are looking to strengthening relations to promote human rights and social justice as servant communities. 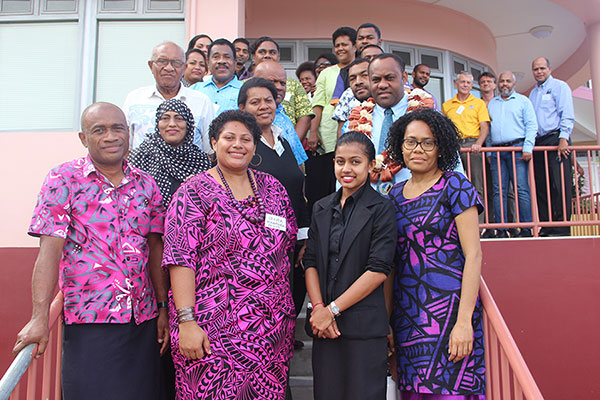 Suva, Fiji —- Civil society’s role in preparing and responding to Fijian communities during disasters is appreciated. These sentiments were expressed by the National Disaster Management Office director, Anare Leweniqila as he opened the Disaster Management and Humanitarian Coordination CSO Review Meeting in Suva early yesterday. “I would like to acknowledge and appreciate the great […]

Mutual Accountability Is Glue For Multisectoral Implementation Of SDGs: PIANGO

Suva, Fiji –  Mutual accountability is the glue that will hold governments, private sector and civil societies together as they pursue the realisation of the Sustainable Development Goals (SDGs) says Pacific Islands Association of NGOs executive director, Emele Duituturaga. Ms Duituturaga made the comments after PIANGO’s participation at the CSO Partnership for Development Effectiveness (CPDE) […]

Vitila at a snail’s pace but still beating the odds

Port Villa, Vanuatu – Vitilia Vuniwaqa will not allow her disability to deter her from becoming a successful farmer and business women. Involved in a car accident and later partially paralysed seven years ago, she has managed to build her small business through organic farming with the support of family and friends. Originally from Luvu […]

Pacific Women in Agriculture acknowledged for their contribution

Port Villa, Vanuatu- Women farmer leaders and other partners were part of an inaugural meeting of the Pacific Women in Agriculture Forum yesterday – focused around the theme “Inspire, Innovate, Impower”. The forum heard that while women and girls are most vulnerable during natural disasters, their voices are seldom heard at community, national, regional and […]

Port Villa, Vanuatu -Over 50 women and men farmer leaders, partners and stakeholders from ten Pacific Islands gathered for the inaugural Pacific Women in Agriculture Forum in Port Villa yesterday. The one-day workshop organized to support Pacific women in agriculture ended with an outcome statement, which is attached in full detail. The outcome statement called […]

MP SPEAKS TO CSO NEXT GEN LEADERS ON PARTNERSHIPS FOR SDGS

Fijian member of parliament, Mosese Bulitavu today assured a group of civil society leaders that he will continue to highlight the sector’s key role in supporting and monitoring the implementation of the Sustainable Development Goals in Fiji. Speaking at the Pacific Islands Association of NGO’s Next Generation Leadership breakfast on SDGs, Bulitavu said the […]

Dear NLU, Partners and Friends, Greetings from the PIANGO Secretariat. Preparations for the hosting of the International Civil Society Week here in Suva, Fiji are gaining momentum as we rapidly approach December! As of September 18, 2017 logistical details that the team have managed to confirm are: University of the South Pacific Laucala Bay Campus, Suva, […]

RADIO NEW ZEALAND INTERNATIONAL  (5:03 pm, 6 September 2017) http://www.radionz.co.nz/news/pacific/338829/tongan-ngo-head-calls-for-national-forum-on-dissolution A prominent NGO head in Tonga has called for a national forum on the events of the past week. Drew Havea is Chair of the Civil Society Forum, the National Leadership Development Forum and National Youth Congress. Mr Havea is also former Board Chair of […]

(8 September, 2017) Suva, Fiji – Multi-stakeholder partnerships that enable the effective participation of civil society in development are not only possible, but have already begun in the Pacific. This, according to the Pacific Islands Association of NGOs (PIANGO) Executive Director, Emele Duituturaga was demonstrated at this week’s 48th Pacific Islands Forum (PIF) Leaders meeting […]

PIANGO participated in a Media Workshop to discuss the effectiveness of media engagement with Civil Society at a workshop organised by the Pacific Islands News Association (PINA), in Apia, Samoa on 2 September, 2017. The PINA media workshop was held in the lead-up to the Pacific Islands Forum Leaders meeting which takes place in […]

A team from PIANGO, led by its Board Chairperson, Sarah Thomas Nededog, is currently in Apia, Samoa to participate in consultations ahead of the 48th Pacific Island Forum (PIF) Leaders Meeting which will take place from 4-8 September 2017. The PIF Leaders Meeting will include the Smaller Islands States Leaders Meeting taking place on 4 […]

“A Pacific Blue Economy must embrace human rights at the very heart of the its sustainability agenda, put people at the front and centre of the development paradigm and recognise that improving human wellbeing is the ultimate outcome of development efforts. “As Pacific Islanders and stewards of this blue continent, the Pacific Ocean we call […]

Pacific CSOs Issue Call for Peace and Solidarity with Guam

(18 August, 2017) Suva, Fiji − The disregard by North Korea and the United States for the lives and political autonomy of Guam’s Chamorro people is evidence of the continued geopolitics of colonisers, says the Pacific Islands Association of Non -Governmental Organisations (PIANGO).   The organisation’s Executive Director, Emele Duituturaga made the comment today following a […]