Home » About Us » Emele Duituturaga 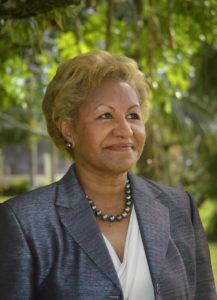 Emele Duituturaga is PIANGO’s Executive Director commencing from 2009 to date. In this role, she has been instrumental in PIANGO’s re-emergence as a regional and global civil society development actor.

She was one of the founding Global Co-Chairs of the newly formed CSO Partnership for Development Effectiveness (CPDE) based in the Philippines. She is also the Pacific representative on the Global Executive Council of the International Forum for National Platforms based in Paris. She has also been appointed as one of the 10 member Global Advisory Group for Bread for the World, based in Berlin.

Prior to joining PIANGO she was a Research Associate at the University of the South Pacific from 2007-2009 and the Fiji Government CEO from 2004 to 2007 for  the ministry of Women, Social Welfare, Poverty Alleviation and Housing.

Prior to 2007, Emele worked in the Pacific region over two decades as a development consultant on projects in adolescent reproductive health, public sector reform, social welfare reforms, NGO Capacity building, evaluation of donor funded projects and programme evaluation and technical assistance to PIANGO – including a three year assignment funded by the Asia Development Bank in Papua New Guinea working as an NGO/Community Development Specialist on Population and Family Planning engaging NGOs, Churches, Women’s Groups and local communities in Health education from 1994-1997. She was the head of the Pacific Women’s Bureau at the SPC headquarters in Noumea from 1997-2000.

She has a Bachelor in Social Work, a Postgraduate Diploma in Corporate Management and a Masters in Business Administration. She has completed first year towards a law degree. She is currently pursuing a second Masters degree – MA in Governance at the University of the South Pacific (Fiji).

Back to The Staff